His name is Edgar  Feuchtwanger and today, at 88, he decided to share his childhood years from 1929 to 1939 in a Munich upper class district, where the Furher moved in a building across the street from his family’a home. As an adult he became a historian, specializing in the 3rd Reich, but keeping his personal life private. Until  Bertil Scali, a young French author and publisher, convinced him to write his unique experience in a book  just released in France with the title ” Hitler My Neighbor ” ( Hitler mon voisin).  The english translation is not scheduled yet. We translated an excerpt of its introduction……

“I was barely fifteen, and for 10 years, He lived just across from our home. Mam told me, that when I was smaller, He was less famous than Uncle Lion. He even helped him to put his coat on, with a condescending ‘Herr Feuchtwanger’, at Cafe Heck terrace where my Dad treated me with lemonades. 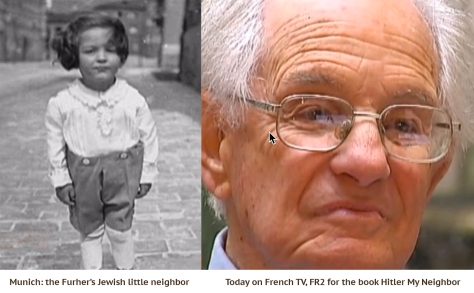 In these parks today prohibited to Jews, I was playing hoops, and chasing pigeons. I love when my Mam revisits my childhood under the Weimar Republic, before the Nazis, before Adolf Hitler became chancellor. Back then , Germany was a Democracy, we were free.  At the time of the Great Depression, Munich was so poor, we couldn’t walk the streets without the fear of being robbed, and the beggars greeted us because they knew my Uncle’s work. They were invited to my house and we shared my favorite meal: hot and crispy sausages. My Dad was a publisher.  In the morning, we used to leave the house together with Rosie, a young woman who was living with us, and who loved me like Mam. Memories are coming back….Rosie had to leave when racial laws took effect.  Often, my Mam would play tennis on the courts behind the house. Sometimes my Dad worked in the living room.  Authors would visit and I would serve the tea. In summer I was in charge of bringing books to his writer friends. I went to Thomas Mann with Rosie, and I prided myself to carry the precious books, wrapped and tied, that they traded with my father. We used to have gateway week ends on wonderful lakes, where we rented villas and spent Summer with friends. Yes, I remember my childhood….I was often invited to Aryan friends’ birthday parties.  Those days, we didn’t  use “Aryan”. We didn’t use anything. We were all the same.

As we can’t go outside anymore, my Mam is telling me stories all day long. She portrayed her youth and my childhood. ” It was a happy time” , she says. When she talks about those years, she smiles again , and I listen to her, endlessly.  I forget the closed curtains, the grey sky and the SS walking along the sidewalks……..”

A collective of journalists and students in journalism.

A collective of journalists and students in journalism.

Exploring the world while visually impaired

A Place Where Blind and Deaf Communities Are Properly Covered

A journalist in New York and elsewhere

Person of the Year

TIME picks the person who most influenced the news each year, for better or worse

In principio artworks for me and for you

WordPress.com is the best place for your personal blog or business site.